The Discord plugin assigns Cred to contributors participating in Discord chats; for example, by posting and reacting to posts.

For instructions on setting up the bot and configuring the plugin, see the Configuration section below.

Cred is minted on Discord reactions. It then flows to connected nodes.

The full set of node and edge types used by the Discord plugin are defined below.

The Discord plugin creates the following types of nodes in the contribution graph:

A Discord message, e.g. "Welcome to the SourceCred community!". A message node will be connected to its author (user node creating the message), emoji reactions to the message, and any users mentioned in the message with an "@".

A Discord emoji reaction, e.g. 😂🌈💜🚀🤯. When a user reacts to a message, a reaction node is created that is connected to the author of the reaction (user that reacted) and the message reacted to.

The Discord plugin creates the following kinds of edges (connections between nodes) in the contribution graph:

An "authors" edge connects an author (user) to a message they created.

A "Reacts to" edge connects a reaction (emoji) to the message reacted to.

An "Adds reaction" edge connects a reaction (emoji) to the author (user) of the reaction.

In order for SourceCred to be able to access your Discord server's messages, reactions and other data, it uses a simple bot whose only function is reading messages and reactions in your server. Creating the bot and adding it to your server will require admin permissions. You will also need to be logged into the Discord web app with the same account with admin permissions.

Below are the basic steps to create your bot, point it at your Discord server and optionally set custom emoji reaction weights.

Under User Settings -> Appearance -> Advanced, turn on 'Developer Mode'. This will give you the ability to right click on items and copy their Discord IDs.

Right click on your server and click 'Copy ID'. Open the Discord plugin configuration file located at config/plugins/sourcecred/discord/config.json and paste the server ID into the guildId field.

Bots require an associated Discord application. In your browser, navigate to the Discord Developer Portal. Click the 'New Application' button. Discord will prompt you to enter the name of your application and a description of it. The name and description can be anything you want. The application is simply to give the bot the ability to communicate with Discord APIs.

Once you have created your application, click on the 'General Information' tab. You should see a APPLICATION ID under the application name. Copy this ID. You'll need it later.

Click on the 'Bot' tab and click the 'Add bot' button. When prompted, confirm that you want to add the bot to the application. On the Bot tab, you should now see your bot. You should also see a 'TOKEN' field under the 'USERNAME' field. Copy this token for later.

Scroll down to the "Privileged Gateway Intents" section and enable the "server members intent" setting. This allows the bot to get a list of the members in your discord server. 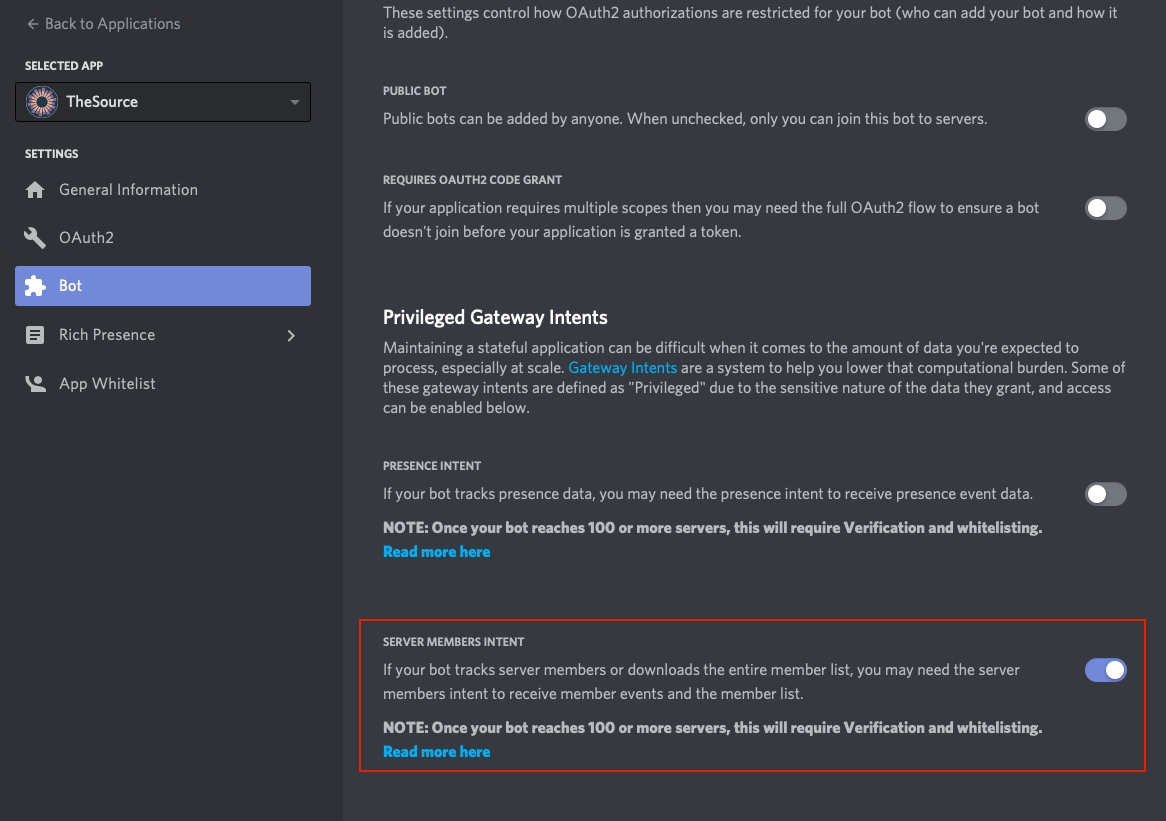 You can invite your bot to your server by constructing a URL with the following format :
https://discordapp.com/api/oauth2/authorize?client_id=${APPLICATION_ID}&scope=bot&permissions=66560

Paste this URL into the browser you're logged into Discord with, with admin permissions. You will then be prompted to select your server and give the bot permissions to read messages and message history.

You will need to create an environment variable named $SOURCECRED_DISCORD_TOKEN and set it to the bot token created in Step 4.

If you have configured SourceCred to run automatically on GitHub, you'll need to add the bot token to the GitHub Action that updates scores. Check out GitHub’s guide for how to add the token as a Secret that can be read by the Action.

The Discord Plugin has the richest configuration features of any of our plugins. An example of a more complex config/plugins/sourcecred/discord/config.json file might look like:

Wow! Let's break it down.

SourceCred can be configured to mint different amounts of Cred for different emojis . This is done by setting custom reaction weights in the Discord plugin configuration file: config/plugins/sourcecred/discord/config.json

If you want to change the weight for a default reaction, just put the reaction's literal emoji in config.json. For example, if you wanted the 💜 emoji to have a weight that is 5 times a regular reaction, add the line "💜": 5 to the config, as shown below.

The emoji ID is 745438325086879794. The reaction weight is then specified in config.json using the following format: $EMOJI_NAME:$EMOJI_ID. So if we want to have :sourcecred_pink: be 20 times a regular reaction, we would add the below line to config.json.

Since IDs are not human-interpretable and can be hard to manage, we support adding comments inside the channel ID key by using the delimiter //. You can see this above as "958390223495238354//general channel": 3

Channel Categories are also supported. Simply add the category ID the same as you would add a channel ID. The category weight will be used if there is not a weight explicitly set for a channel within the category.

There are 3 edge types that connect a message to a user: authors, mentions, and props. By default, a message will use authors and mentions. If you add channel IDs to propsChannels, messages in those channels will use authors for the author and props for people mentioned. With a high edge weight set for props edges, the people mentioned in messages in that channel will receive much more cred than the authors. Additionally, props channels allow reactions by the author of a message to be counted (they are usually ignored). This is a great way to implement a #props or #praise channel, where people can post praise for others.

In Discord, channels can be marked as NSFW (not safe for work) in the channel's settings. If you really want to include NSWF channels in the graph, you can set includeNsfwChannels to true. We discourage this, because message previews are included in the CredGraph, so you may be exposing explicit content publicly.